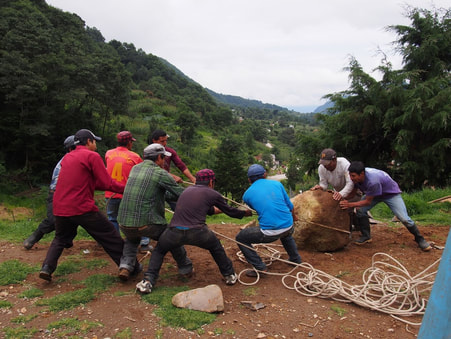 La Vega del Volcan is a community located in the mountainous region of northwestern Guatemala. At an elevation of 4000 meter above sea level, this remote community exists without consistent access to food. Local food production makes up 65% of the community’s nutrition. In an effort to produce a high quality protein source for its community members, a trout farm was started in 2005. While environmental conditions for raising Rainbow trout in this high altitude community were ideal, fish farm yields were low hatching less than 2,000 eggs per year.

July 2012: Our chapter began a 5 year commitment to developing sustainable solutions to problems exiting within the community. During the 2012-2013 school year, our chapter worked with the community to improve aquaculture techniques.  Together the fish farm’s incubation system was redesigned, water delivery to the farm was rerouted and the water source for the fish farm was secured.
​
​September 2013: The implementation of adapted aquaculture designs and techniques occurred. In the subsequent spawning season, the community was able to successfully hatch 25,000 eggs.

January 2014: A second project was conceived by members of the community. In this community of 750 people, where 350 are children, no formal play/gathering space exists. Our chapter is currently working with the community to construct a community gathering space that will serve as sports field for the children of the community and a market space allowing for regional vendors to gather for farmers markets. Altogether, this multi-use structure has been designed to the community’s specifications to serve as cultural epicenter.

January 2015: Representatives of our chapter traveled to La Vega del Volcan and completed phase one of the community center project. A concrete foundation was laid allowing its use as play field. In September of 2015, phase two began with the successful construction of 12 reinforced concrete columns. These columns are intended to support a steel roof structure to be constructed in autumn of 2016.

September 2015: A group of UW students and two professional mentors spent several weeks working side by side with volunteers from La Vega to begin construction of the community center. Efforts were focused around the pouring of 12 concrete pedestals. In addition, several retaining walls and the beginnings of a new storm drainage system were installed.

July 2017: Two additional projects in addition to the gathering space were approved. These projects are the improvements in the fish hatchery system and the construction of a field drainage system.

August 2017: A group of UW students and professional mentors went back to the community to gather data for the field drainage system and fish hatchery. During this trip, the team also met with the contractor of the community gathering place to discuss about the implementation of a covered structure.

March 2019: A group of UW students and professional mentors went to the community to oversee the implementation of the three projects. The roof-covered community gathering place was erected. French drains and perimeter drains were laid on-site for the drainage system. The filtration system, which includes a bucket enclosure for the pipe entrance and a weir to pool the water, was implemented for the fish hatchery.

December 2019 or March 2020: A group of UW students will return to the community to assess the efficacy of each of the projects. This trip will also conclude the chapter's partnership with the community.
Want to get involved? Contact Translator Samuel Pacheco (paches@uw.edu) or Co-Leads Rebecca Lilliquist (lillir2@uw.edu) and Kevin Garcia (keving00@uw.edu) for more information!